Why I stuck with libertarianism — despite the kukubirds in the movement 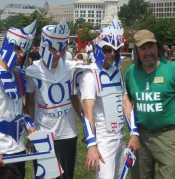 The Libertarian Kukubird in its natural habitat.

I came by my own libertarian sensibilities honestly. I grew up in a mining town that produced gold, silver and copper; but above all, Battle Mountain, Nev. made libertarians. Raised on 40-acre square of brown sage brush and dead earth, we burned our own garbage and fired guns in the back yard.

He later fled the libertarian movement for the following stated reasons:

“Bring in the clowns,” [the smart, charismatic Ron Paul staffer] said, and smiled before I lost her in the mass of people [at the Republican Convention]. I will never forget that moment: Bring in the clowns. At the time, I considered myself a thoughtful person, yet I could hardly claim to be one if you judged me by the company I kept. The young lady knew something I had not yet learned: most of our supporters were totally fucking nuts. … From the ashes of the election rose the movement that pushed me from convinced libertarian into bunny-hugging liberal. The Tea Party monster forever tainted the words freedom and libertarian for me. The rise of the Tea Party made me want to puke, and my nausea is now a chronic condition.There are a lot of libertarians in the Tea Party, but there are also a lot of repugnant, religious nuts and intolerant racists. “Birthers” found a comfy home among 9-11 conspiracy people and other crackpots. After only a few months, I had absolutely no desire to ever be linked to this group of people.

I began to think about real people, like my neighbors and people less lucky than me. Did I want those people to starve to death? I care about children, even poor ones. I love the National Park system. The best parts of the America I love are our communities. My libertarian friends might call me a fucking commie (they have) or a pussy, but extreme selfishness is just so isolating and cruel. Libertarianism is unnatural, and the size of the federal government is almost irrelevant. The real question is: what does society need and how do we pay for it?

So let me get this straight: Raised in libertarian Battle Mountain, Nevada, on a diet of sage brush and burnt garbage, Edwin Lyngar became a Ron Paul delegate to fulfill his libertarian vision on starving poor children to death. But intolerant Tea Party racists and kukubirds made him nauseous, and he had absolutely no desire ever to be linked with them. Thereafter, he began to “think about real people”. Upon some soul searching, he realized that he no longer wanted to starve poor children to death, and that he liked National Parks, too. That’s when he decided to become a liberal. Do I have that about right?

Well, this may come as a shock to Salon.com’s readership, but most libertarians, myself included, and even tea party kukubirds, don’t see themselves as wanting poor children to starve to death. To the contrary, we envision alternative means of making such necessities more affordable for all, including granting the public greater freedom to innovate, carry on businesses, and work. Of course, libertarians get trounced in most elections because most voters either don’t understand the libertarian alternatives, or they don’t believe that libertarian alternatives will actually make food more affordable, or they believe that trying the alternatives will be too risky. This is all understandable. Although grounded in what I believe to be sound economic principles, it is a leap into the unknown and untested, as far as most Americans living today can tell.

What’s not understandable is a self-styled former libertarian carrying on as if libertarians have offered no alternatives to the welfare state. I won’t go into the specifics of the libertarian vision of prosperity here. Suffice it to say that suggesting that libertarians simply want people to starve to death, or don’t care if they do, as if libertarians have no alternative ideas in mind for improving prosperity, is a shameless libel. If that’s how poorly Mr. Lyngar represented the liberty movement when he was in it, then, frankly, I’m relieved that he is now out of it, and I hope he stays out of it so long as he demonstrates such an inability to articulate the fundamentals of market economics.

Mr. Lyngar threw in this stuff about starving poor children almost as an afterthought. It seems to me that his priority was to rehabilitate his own image. He certainly devoted more bandwidth to distancing himself from kukubirds than he did to feeding hungry children. Fair enough. The libertarian movement has more than its fair share of kukubirds. I am concerned, at times, that I might be mistaken for one of them, but I stick with the movement anyway. I take that risk. I take those lumps. Why do I do it? I do it because I believe that the libertarian political philosophy is grounded in sound economic and moral principles, as articulated by the scholars at the Ludwig von Mises Institute, the Cato Institue, and by the thoughtful pundits at Reason.com, among other luminaries. That some racists and kukubirds have also associated themselves with the movement has no logical bearing on the soundness of its underlying economic principles. I posit that, like Mr. Lyngar, these unsavory characters probably joined the movement for reasons other than the sound economic principles on which it is based, such as the nurture of growing up around libertarians, or the inarticulate distrust that spawns conspiracy theories.

I will not abandon sound principles because others do not understand them. I will keep the courage of my convictions. I will not let the presence of kukubirds drive me from what I believe to be right. I will remain a libertarian until some non-libertarian demonstrates to me the alleged flaws of libertarian economic principles. As far as I can tell, Mr. Edwin Lyngar hasn’t bothered to try.